Visitors to the Pacific Coast University for Workplace Health Sciences (PCU-WHS) always stop to admire and photograph the west coast carved figure presiding over the entrance hall. This custom woodcarving welcomes all who arrive here and offers the opportunity to acknowledge that the University is on the traditional territory of the Nuu-chah-nulth people and to give thanks for the privilege of sharing this land today. “It’s so iconic to everyone who comes here” noted PCU-WHS president, Wolfgang Zimmermann.

The original installation of this custom art piece was not just as an appreciation for local Tseshaht / Nuu-chah-nulth artist and carver Gordon Dick’s work and to show recognition for the West Coast First Nations culture in this area. In fact, the carving was commissioned specifically for the grand opening of the University in 2011 and was designed to align with the focus and intentions of the University’s founders, partners and students. The figure on the pole depicts ‘?uštaqyuu’ a traditional healer or shaman, whose life and purpose is dedicated to the practice of healing mind, body and spirit – the closest western equivalent is ‘doctor’.

Gordon Dick recalls his first meeting with Wolfgang Zimmermann back in 2011 to discuss creating a statement piece for the new facility. “We talked initially about creating a large panel to hang on the wall and then I mentioned that my good friend Ray Sim, who is another artist, had this conceptual design of ?uštaqyuu and he had created a maquette [a miniature version]”. Subsequently the initial concept for an    ?uštaqyuu figure pole was selected for the University’s feature piece.

Today, nine years after its original installation, the artist returned to PCU-WHS to review the stability and condition of the wood and maintain the carving for many more years to come. The process involved inspection, cleaning and re-applying a coat of citrus oil to seal the surface. The 9 ft pole was carved from a 500-year-old tree that came from the Uchucklesaht /Kildonan area (on the West side of Barkley Sound approximately 25km along the inlet from Port Alberni).

Dick explained that the citrus oil will help to once again bring out to the beauty of the wood grain that has slowly faded over the years, as well as providing a protective layer to help preserve the carving. While he worked to restore and maintain the figure pole, Dick reminded us of all of the additional elements that he added to the carving and spoke to the significance of each of them. 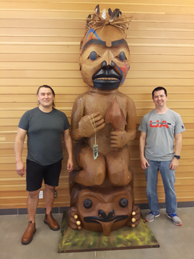 “?uštaqyuu is performing a prayer while holding a rattle, and for our region the visual signature for a rattle is a grouse…the crystal he is holding represents the gift of healing he is receiving and is also about to give away… if we look back far enough into our history people were more in touch with nature and that was true for ?uštaqyuu, who (whether female or male)  had as their gift and their role in the community to be a healer or a shaman. The foliage on the base symbolizes knowledge and medicines derived from nature and earth. The presence of the frog in nature is an indicator of the health of the water source and so this frog represents a medicine helper who assists and guides
?uštaqyuu”

Those meanings and depictions offer a warm welcome and the gift of healing to anyone who visits Pacific Coast University for Workplace Health Sciences. 2020 has been a challenging time for so many people around the world and we are thankful more than ever for ?uštaqyuu’s omnipresent message and symbolism.